Some of you may have already read this one when I posted it elsewhere, but I think it really belongs in the collections series, too. Enjoy!

On one wall in my studio there are four naive pet paintings. Paintings painted by amateurs who loved their pets enough to want to immortalize them in pet portraits.
The first I found  at a garage sale — a little black and white cat sitting on a pink pillow against a purple background with orange flowers. Although it is not a very good painting, I think I bought it because I could see that it was done with love, and I just didn't want it to end up in the trash.

The second is another of a striped cat  lying on a quilt, found in a thrift store. After all, I already had one pet portrait, and I needed to add to my new collection.

The third one, also from a thrift store, was purchased sometime in 2007. It's a scary little dog, but there there is an amazing story attached to this painting.

In January of 2008 a woman bookbinder from Ireland, who found my book clasp site on the web through a Google search, contacted me and wanted to come by my studio to look at the book clasps, and the set up and talk. She was in Chicago visiting family. Her brother in Chicago drove her to my studio, and came in and with her. He was a little odd and kind of edgy.


As I was showing her around he started to get agitated and she asked him what was wrong. He had noticed the painting and was nearly freaking out. I was a little afraid he was going to have a psychotic break or something. However, It turned out that he was the artist who had painted this portrait as a commission for one of his neighbors. He was shocked to see the picture in my studio out of it's original context, especially since I was a complete stranger to him, and we were located far from their neighborhood. I was also absolutely stunned by the coincidence. In fact, I didn't  even believe him until I looked on the back of the painting and there was his signature. I took a photo to document the event.

A very strange circumstance indeed. I can't imagine the probability against such a convergence of circumstances.

I nearly died laughing when I found the last painting, acquired just this year, at another thrift store. It is my very favorite, though. These two dancing chihuahuas must have been much loved, and you can see that they loved each other as well. I give you, Missie and Samba, immortalized by Lula M. Galbraith, Jefferson City, TN., 1983.

I just love these guys! How can I ever stop looking for these paintings and adopting them? Or are they looking for me?
Posted by JM at 11:09 AM 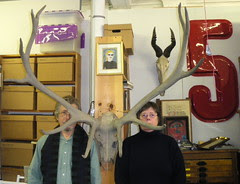