On Saturday we actually got up early and went out to a couple of estate sales for the first time in a very long time. Three of them were second day of the sale. Depending on what you are looking for, you can sometimes find some good bargains especially since they will often discount prices on the second day.

While we didn't find anything spectacular, we did find several interesting items which will go in the mall or in our Etsy shop eventually.

One was this set of three Cameo cleanser holders. They are covers meant to beautify containers of bathroom or kitchen cleanser and to coordinate them with your decor. 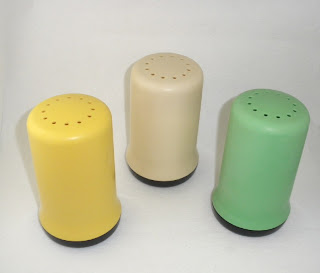 The colors and the shape are what prompted us to buy them. Originally, I thought they were from the 50s, however, I found out that they were actually around in the late 1930s, and they are apparently Bakelite, at least according to this ad. I suppose that makes them more of Deco item, but I still think they have a bit of an Atomic look. Or, maybe it's just me getting a big 50s vibe from them. In any case, I am sure they were probably around for a number of years. These are missing the cameo, but I actually like them more this way.

One did have an original cameo cleanser insert. 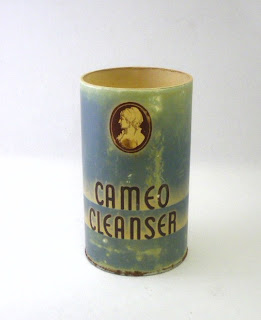 They are certainly still useable today. I'm sure there are cleanser packages which could be modified to fit nicely. I have some ideas about other possible uses as well.

On the second day of a sale you feel more relaxed and less pressured to hurry through and there's more time to spend digging through basement detritus to find the odd overlooked item. It's really easy to dismiss these common household items, but I find some of them to be interesting and curious representatives of the design sensibilities of an era, and often a real bargain.